Derby della Madonnina, as known as the Milan Derby between AC Milan and Inter Milan, is one of the most high-tempered local derby in football world.

It is called "Derby della Madonnina" in honour of one of the main sights of the city of Milan, the statue of the virgin Mary - which is usually called "Madonnina."

AC Milan were established in December 16, 1899 by former British vice-consul Alfred Edwards and were absorbed in nationalistic ideals, which they wouldn’t allow any foreign player to become part of them.

In 1908, issues over the signing of foreign players kindled a rift inside the club and led to a split and the foundation of F.C. Internazionale Milano, which caused a historical rivalry between both clubs.

In the past, Milan was the working-class team and was supported mainly by workers and migrants from Southern Italy. Meanwhile, Inter was seen as the club of the Milan bourgeoisie, being of the property-owning class and exploitive of the working class.

However in the recent years this difference has broken down, since Milan is now owned by Italian Prime Minister Silvio Berlusconi and Inter is owned by oil tycoon Massimo Moratti.

In the late 1980s and early 1990s, the Milan derby saw the Dutch trio of Marco van Basten, Frank Rijkaard and Ruud Gullit played for Milan, while the German trio of Andreas Brehme, Jürgen Klinsmann and Lothar Matthäus wore the Inter colors.

This rivalry is mainly remembered for a famous 1990 World Cup incident, when the Netherlands confronted Germany at the San Siro, home ground of Inter and Milan. The match ended in defeat for the Dutch as Rijkaard saw red after spitting on German forward Rudi Völler. The Germans won 2-1 with two of the Inter players Klinsmann and Brehme scoring, a moral victory for Inter fans.

Milan, however, was the more dominant team both locally and internationally. They built a squad under Fabio Capello's lead, later nicknamed as the 'Invincibles', and reached the Champions League final three times in a row.

On the other hand, Inter's drought for a major title - their last major title was the Scudetto in 1989 - ended in 2006 when the Calciopoli scandal stripped Juventus' 2005-06 Scudetto and handed it to the Nerazzurri. They has since clinched the 2007 Serie A title as well, with a record-breaking run of 17 consecutive victories.


The Most Infamous Match

AC Milan were leading 1-0 (and 3-0 on aggregate) when Inter Milan's supporters became infuriated after a second-half Esteban Cambiasso leveler was controversially denied by referee Markus Merk.

Bottles and coins were thrown onto the pitch, but soon increased to lit flares and Milan keeper Dida, was clearing bottles in order to take a goal kick, was hit by a flare on the back of his right shoulder.

The match was halted at the 74th minute and restarted after a thirty-minute delay. However, Dida was unable to continue, suffering bruising and first-degree burns to his shoulder, and was replaced by Christian Abbiati.

But the match was finally abandoned in less than a minute after more flares and debris rained down. Milan was awarded a 3-0 victory, totaling a 5-0 aggregate.

Meanwhile, Inter were fined €200,000 - the largest fine ever handed down by UEFA - and were ordered to play their first four Champions League matches behind closed doors in the 2005/06 season as punishment. 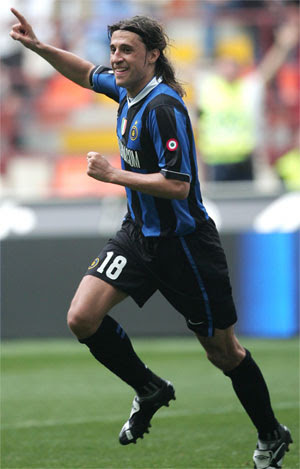 Even though Derby della Madonnina is one of the most raging derby in Italy, but surprisingly both clubs do not forbid players exchange between them.

AC Milan players such as Andrea Pirlo, Clarence Seedorf, Dario Šimić and Giuseppe Favalli, all were played for Inter Milan.

While Hernán Crespo is a former Rossoneri player in 2004/05 season. Patrick Vieira is also had a brief spell in 1995-96 with Milan, which he made only two Serie A appearances before moving to Arsenal.

Please subscribe to our RSS feed to receive more updates. You can also subscribe by Email and enjoy our latest posts sent directly to your inbox.