Being a football player is one of the most lucrative jobs that anyone could have, but with all the discussions regarding the money involved does anyone actually know how much money the best of the best are paid? Here we look at the top 10 paid players in world football today.

The top 10 of the highest paid footballers starts off with Antoine Griezmann, who according to the infographic from Find Betting Sites is earning $3,206.02 every hour from his contract at Spanish club Atletico Madrid. The French World Cup Winner is being targeted by champions Barcelona so could be expected to climb this list soon. 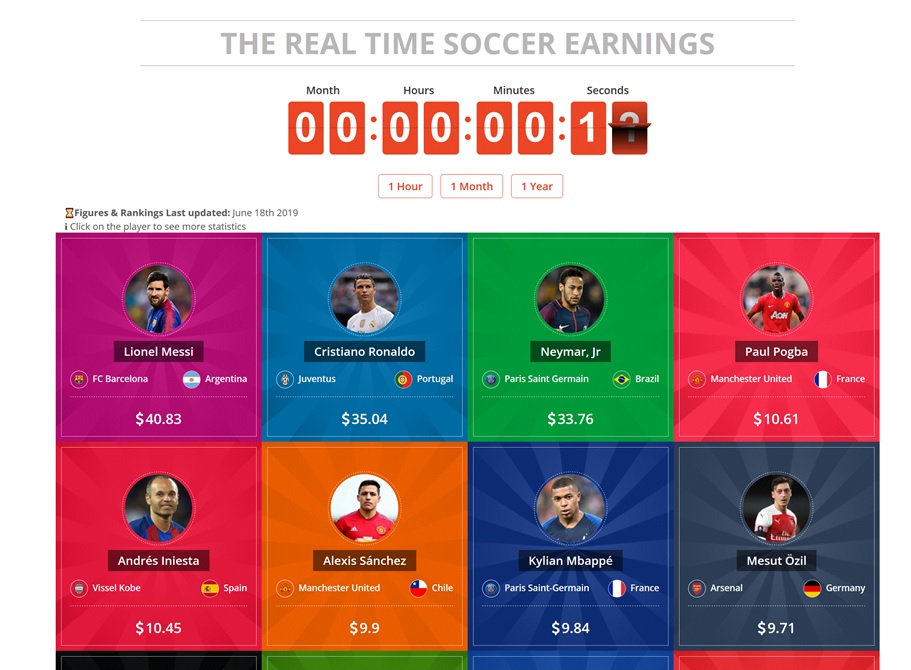 The second highest paid player not playing in Europe is in 9th place on the list with former Chelsea man Oscar being paid $3,356.48 an hour by Chinese Super League side Shanghai SIPG. The Brazilian star has previously discussed his surprising move by saying he moved to ensure a better future for his family and not for football reasons, which has been met with a backlash from some football purists.

Earning around $100 an hour more than Oscar is Arsenal’s German playmaker Mesut Ozil. With a reported hourly rate of $3,495.37, the English club may have hoped for more from their talisman as it’s fair to say he is yet to hit the headlines for the London club.

The second of 3 Frenchmen on this list comes into 7th place with youngster Kylian Mbappe earning himself an hourly wage of $3,541.67 when he moved to Paris Saint Germain following a couple of breakthrough years at Monaco.

Manchester United forgotten man Alexis Sanchez comes into 6th place with the contract that he signed when moving from Arsenal to the Red Devils in January 2018. With an hourly salary of $3,564.81, the transfer has caused issues in the dressing room, especially given the lack of impact that the Chilean has had at the club.

The top 5 is started off by our second player that is based outside of Europe in Spanish playmaker Andres Iniesta. The diminutive midfielder won every trophy and accolade he possibly could while at FC Barcelona, and moved to Japanese side Vissel Kobe to continue his playing career, earning $3,761.57 an hour in Asia.

Continuing into 4th place, we have the last player from the English Premier League in World Cup Winner and Manchester United star Paul Pogba. The Frenchman may have had his run ins with managers at both club and international level, but he is still being paid $3,819.44 an hour after his return to the club that he left on a free transfer at the age of 19. He is yet to provide the major silverware that he was bought in for.

The top three is started off by the player with the world record transfer fee in Neymar Jr, who moved from Barcelona to Paris Saint Germain for over $200 million. A fee that is yet to be beaten and is unlikely to beaten in the near future. Despite the high fee, and not yet providing the UEFA Champions League trophy that his club so badly wants, he is still paid a reported $12,152.78 an hour. This wage is miles ahead of the 4th place and shows the disparity between the top three best players and the rest.

The top two places could go to no one else but Cristiano Ronaldo and Lionel Messi, who have dominated football headlines for years. Their rivalry goes beyond the pitch with many football fans choosing one to follow as their GOAT (Greatest Of All Time) and using many facts to back up their claims. In terms of money, however, there can only be one winner and this crown goes to the Argentine captain Messi. He earns a reported $14,699.07 an hour compared to $12,615.74 earned by his Portuguese rival.

In total, $64,212.95 is paid per hour to the top 10 players in the World, in just their salary earnt. They will more than likely earn double or triple this when you include the sponsorship deals and bonuses that are paid to them. Do you think these players are worth their money? Have they earned it? Some of the facts around these players do suggest that their respective clubs have got their money worth.