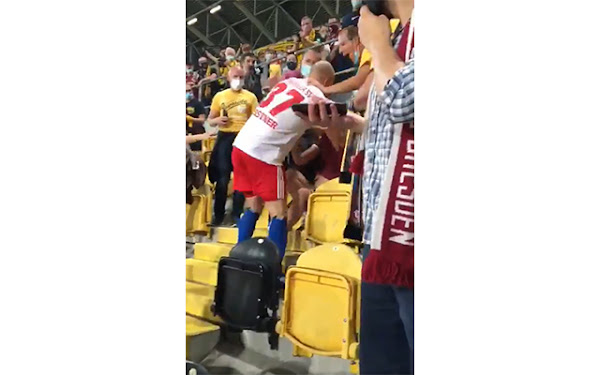 There was an unbelievable scene in Germany on Monday as Hamburg defender Toni Leistner broke off from a post-match interview to climb into the stands and attack a Dynamo Dresden fan.

The shocking moment at the end of Hamburg's 4-1 DFB-Pokal defeat sparked uproar in the crowd of 10,053 at the Rudolf Harbig Stadion.

Leistner, who was born in Dresden and played for Dresden between 2010 and 2014, strode up the stairway, appearing to push a fan in the chest then shoving him further backwards onto the floor.

Stewards and other fans intervened, and after some 20 seconds, the 30-year-old centre-back returned to the pitch.

After the match, Leistner revealed on his Instagram Story that his response was provoked by the verbal taunts from those in the crowd.


After the match in my hometown, I was verbally abused from the stands. I can usually cope with it. But this was extremely and massively below the belt, against my family, my wife and my daughter.

That's when I lost it, even more so because it was already an extremely emotional match for me. Regardless, this should have never happened to me. I am a father who wants to serve as a role model. I apologise in all forms and can only promise that -- no matter what insults are thrown my way -- this will never happen again.


The incident will likely remind supporters of when England and Tottenham Hotspur player Eric Dier clambered up the stands to confront a fan after his club's FA Cup loss to Norwich City in March.

The fan was said to have verbally abused Dier in front of his family, which prompted the 26-year-old to take action.